Hosted by the Representation of the Free State of Bavaria to the European Union, the XII ELRA General Assembly took place in Brussels on Thursday 26th November 2010.

The meeting was attended by representatives of 23 ELRA members from 19 EU Member States. Representatives from Italy, a country interested in our association also participated. In this occasion, Bosnia and Herzegovina and Croatia became new ELRA observer members during the Assembly. They will become full ELRA members when they will join the EU. 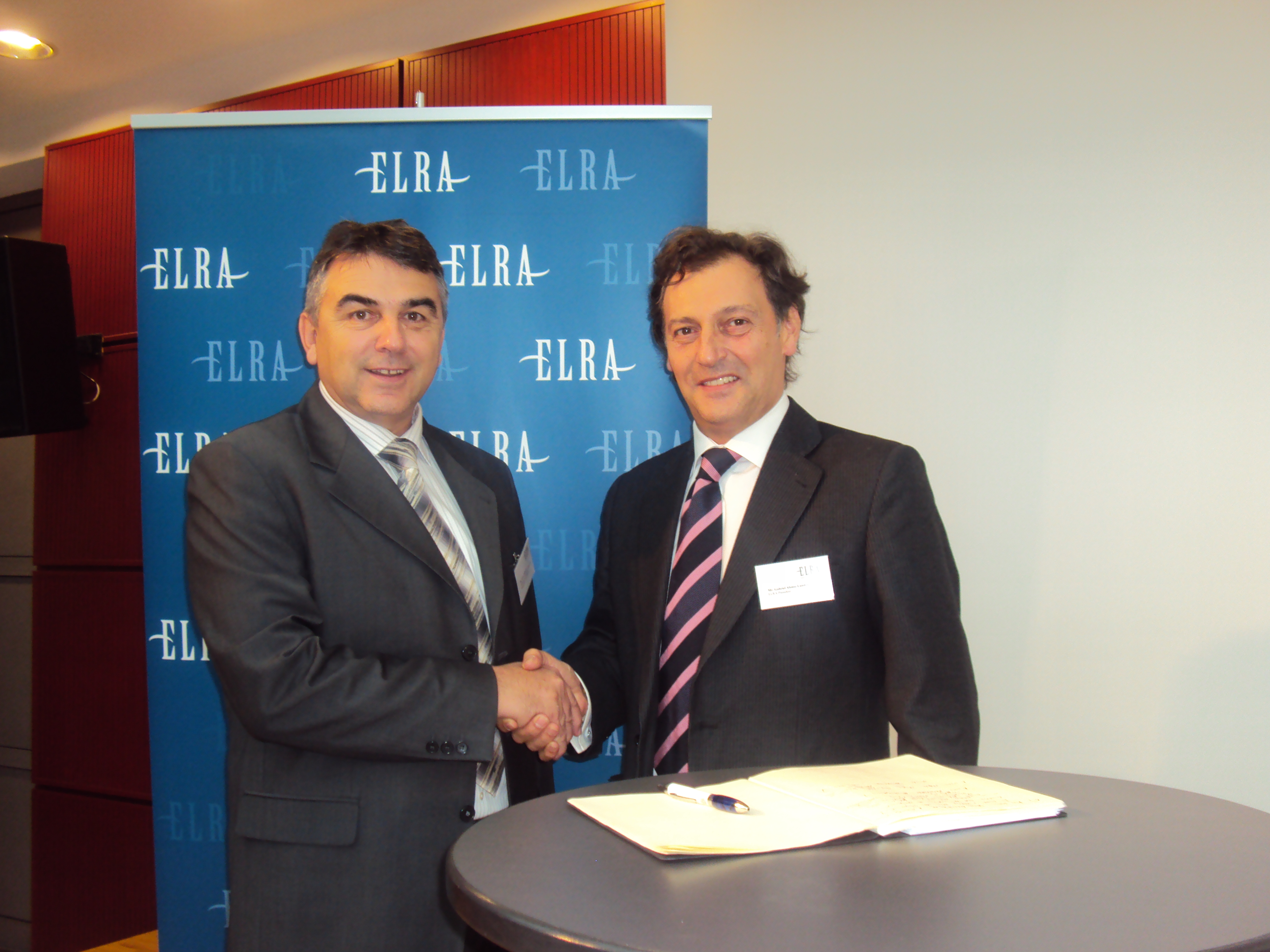 Mr. Damir Kontrec and Ms. Mirela Fuckar, representatives of Croatia, after signing the instrument of adhesion. 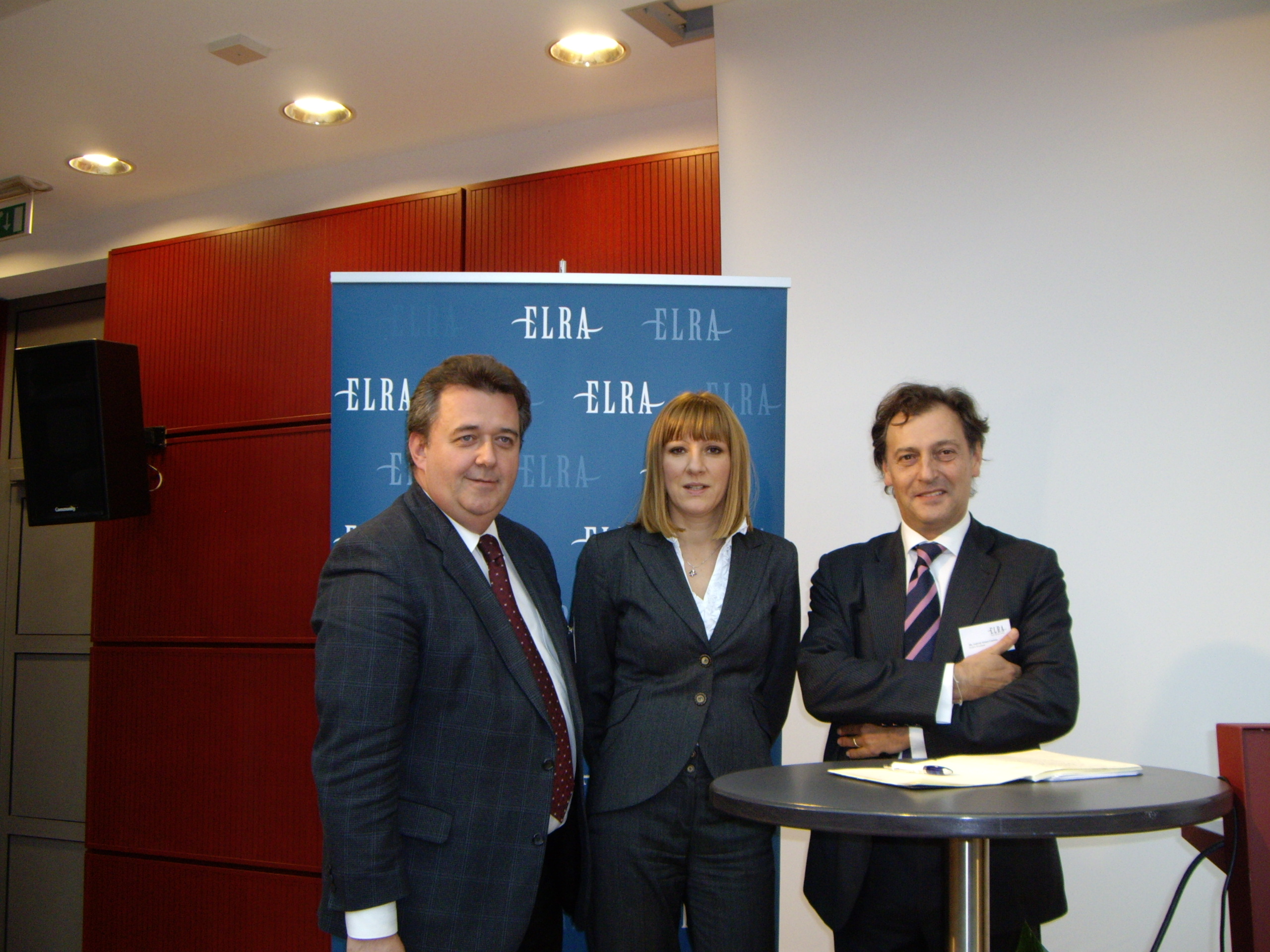 The ELRA Assembly was opened by Mr. Gabriel Alonso, ELRA President, who welcomed all the delegates to the meeting and explained the recent activities carried out by the Association. He stressed the setting up of the network and the celebration of the first contact point meeting.

Following the President introductory speech, the Assembly welcomed the two new Member Associations, who signed the Members’ book. ELRA is delighted to provide its experience in Land Registry matters to Bosnia and Croatia for achieving theirs objectives.

One of the main topics of this XII Assembly was the European Land Registry Network (ELRN), which aims to facilitate the influence of Land Registries upon European civil justice cooperation instruments and to contribute to the strengthening of the European space of freedom security and justice.

After the internal matters, Mr. Johan Pieters (Service Public Federal Finances Belgique) introduced the “Questionary & Solutionary” to the Assembly. The solution suggested was the restoration of the principle of the lex rei sitae and the enhancing of the utility of the European Certificate of Succession, by including the land registration formalities in the Certificate.

On the subject of this matter, ELRA was honored to welcome as a speaker Ms. Karen Vandekerckhove, from the Unit of Judicial co-operation in civil matters, DG Justice of the European Commission, who made a presentation about the possible impact of the Proposal for a Regulation ‘in matters of succession’ on the Land Registries. She appointed that Land Registry services can help citizens around Europe within registration of the European Certificate of Succession.

Then, and continuing with the EC Papers, ELRA had the pleasure to welcome another representative from DG Justice of the European Commission, Mr. Mikolaj Zaleski from the Civil and Contract Law Unit. He made a presentation about the Green Paper on policy options for a European Contract Law for consumers and businesses, which study the different options on how to strengthen the internal market. The speaker stressed the idea that an instrument of European Contract Law should respond to the problems of diverging contract laws without introducing additional burdens for consumers or business. This instrument should be comprehensive and self-standing.

After the presentation about the Green Paper, Mr. Alonso introduced the Action Plan implementing the Stockholm Programme, which sets the priorities for developing the European area of freedom, security and justice in the next five years and ensures citizens the exercise of theirs rights in the EU. The ELRA President concluded that putting national Land Registries into action at the service of the EU citizens, regardless their nationality or their place of residence, contributes to strengthen their right to free movement and private property and facilitates cross border transactions removing obstacles for the single market integration.

And finally, to finish the morning session, the coordinators of the two ELRA Working Groups introduced their activities.

On the one hand, Mr. Harald Wilsch, coordinator of the Working Group on International Law, focused on the legal restrictions and the ongoing handbook on the Aspects of Debt Enforcement Procedures and Foreclosure in European Land Registry Matters.

On the other hand, Mr. Wim Louwman, coordinator of the Working Group on E-Conveyancing, explained the objectives and main work carried out by his Working Group, focusing on the CROBECO Project, already introduced to ELRA Members the day before during the CROBECO Conference.

In the afternoon session, and taking into account that the XII Assembly was held at the Representation of the Free State of Bavaria, we focused on the Land Registry System in Germany. Mr. Harald Wilsch, ELRA Secretary General, made a demonstration about the German System and Mr. Andreas Luckow, head of international Real Estate Finance Association of German Pfandbrief Banks, talked about the Land Register Disclosure Requirements and Protection of Trust with Security Rights over Real Property in European Comparison.

Finally, the President reviewed the outcomes of the meeting, thanked the German hosts for their welcome, the new members for their adhesion and all the participants for their attendance. He encouraged everybody to continue working hard for the Association and announced that the next Assembly was scheduled to take place in Brussels in spring 2010.