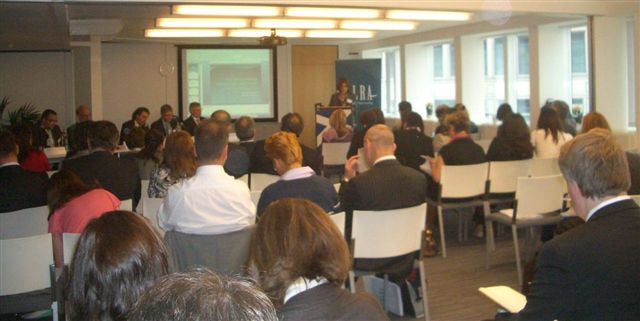 The ELRA Assembly was opened by Mr. Gabriel Alonso, ELRA President, who welcomed all the delegates to the meeting and explained the recent activities carried out by the Association.

He emphasized the most important achievements in this past term: the significant increase in the number of ELRA members; the setting up of a cooperation network of land registrars named the European Land Registry Network (ELRN); the Working Groups activities; and the promotion of relations between ELRA and other European Associations such as EULIS and Eurogeographics. Finally he stressed the importance of the invitation to take part as a founding member in an important academic initiative, the European Law Institute (ELI), whose aim is to contribute to the formation of a more vigorous European legal community.

According to the provisions of ELRA statutes, a new Board of Directors was elected. Mr. Wim Louwman (Land Registry and Cadastre Agency of Holland) was appointed as the new President, Mr. Gabriel Alonso (Colegio de Registradores de España), as the Secretary General, Mr. Johan Pieters (Service Public Federal Finances Belgique), as the Treasurer, and Mr. Chris Pitt-Lewis (HM Land Registry of England and Wales) and Mr. Mihai Taus (Land Registry Association of Romania) as the two administrators. 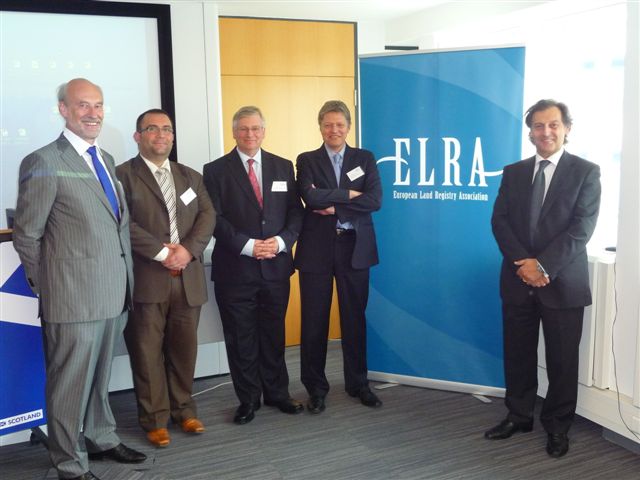 The new President, Mr. Wim Louwman, presented the future activities of the Association for the next two years. He stressed the importance of the actions initiated by the former Board, such as the ELRN, and expressed his commitment in continuing working hard for the Association for the common interest of Members and on the same basis, collaboratively with the European Institutions.

Following the administrative business, ELRA was honored to welcome as a speaker Ms. Niovi Ringou, Deputy Head of Judicial Co-operation in Civil Matters Unit at the European Commission, who made a presentation about the Green Paper Promoting Free Movement of Public Documents and Recognition of the Effects of Civil Status Records.

After Ms. Ringou, Mr. Gabriel Alonso explained ELRA´s position. Mr. Alonso emphasized that the recognition of authentic acts means free circulation of those documents when they meet the land registry requirements regarding their content, the lex rei sitae requirements, and the form of the document, that is its probative value, with two limitations: no greater effects than those given to the document by the national law of the State where it has been drawn up, and no more effects than those given to the same kind of documents by the legislation of the State where the document has to be applied.

Another important topic of this XIII Assembly was the European Land Registry Network (ELRN), which aims to facilitate the influence of Land Registries upon European civil justice cooperation instruments and to contribute to the strengthening of the European space of freedom security and justice. Mr. Chris Pitt-Lewis and Mr. Mihai Taus made different presentations about the ELRN. While Mr. Pitt-Lewis talked about the Annual report of the activities carried out in 2010, Mr. Taus focused on the Public Reference Information.

Afterwards, Mr. Johan Pieters introduced the Proposal for a Regulation in matters of succession and creation of a European Certificate of succession (articles 40.3 and 42.5) and its registration in the Land Registry.

After the coffee break, the Assembly focused on more technical matters, related to the latest developments in E-justice and the Digital Agenda, that will facilitate electronic services across Europe, including, perhaps, land registration in the future.  Mr. Jacques Vos (Land Registry and Cadastre Agency of Holland) made a presentation about the Digital Agenda: Consultation on eSignatures and eIdentification and, related to this matter, ELRA had the pleasure of welcoming another representative from the European Commission, Mr. Gérard Galler, from Internet, Network and Information Security Unit, Directorate General Information Society & Media, who introduced a revision of the e-signature policy of the EC.

Following Mr. Galler’s presentation, Mr. Ingmar Vali (Centre of Registers and Infosystems of Estonia) introduced the E-Codex. The goal of this project is to improve the cross-border access of citizens and businesses to legal information and processes in Europe as well as to reinforce the interoperability between legal authorities within the EU. There are 14 Members States participating in this project.

Continuing with the EC Papers, Ms. Susan MacInnes (Registers of Scotland) talked about the Proposal for a Directive on credit agreements relating to residential property, to be seen in the context of efforts to create an internal market for mortgage credit and against the background of the financial crisis.

And finally, to finish the morning session, Mr. José Simeón Rodríguez (Colegio de Registradores de España) made a presentation about the Proposal for Council Regulations on jurisdiction, applicable law and the recognition and enforcement of decisions in matters of matrimonial property regimes and regarding the property consequences of registered partnerships. The purpose of this proposal is to establish a clear legal framework in the EU for determining jurisdiction and the law applicable to matrimonial property regimes and facilitating the movement of decisions and instruments among the Member States.

In the afternoon session, the coordinators of the two ELRA Working Groups introduced their recent activities.  On the one hand, Mr. Harald Wilsch, coordinator of the Working Group on International Law, explained the work being done to prepare a Handbook on Legal Restrictions, similar to the well-received handbook on the Aspects of Debt Enforcement Procedures and Foreclosure in European Land Registry Matters. On the other hand, Mr. Wim Louwman, coordinator of the Working Group on E-Conveyancing, explained the objectives and main work carried out by his Working Group, focusing on the ongoing CROBECO Project.

Finally, the new President, Mr. Wim Louwman, reviewed the outcomes of the meeting, thanked Scotland House for their welcome, the new members for their adhesion and all the participants for their attendance, and encouraged everybody to continue working hard for the Association. He announced that the next Assembly was scheduled to take place in Tallinn (Estonia) in autumn 2011.